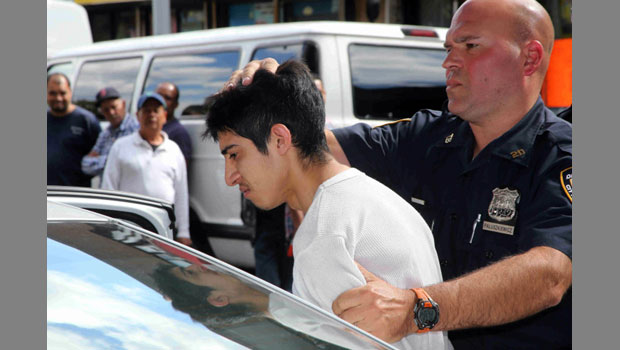 A crazed Bronx man stabbed two men – one fatally – and told cops he did it because they blew kisses at him, police sources said.

Steven Torres, 22, was charged with second-degree murder in the slaying of Ever Orozco, 69, who was butchered in broad daylight on a busy Queens sidewalk after dropping off his wife at a doctor’s appointment.

Witnesses said Torres repeatedly plunged a huge blade into Orozco’s neck and torso at about 1 p.m. Monday on 90th Street in Elmhurst.

“When I heard the commotion, I ran out of the store and everybody was yelling: ‘Stop! Stop! Don’t stab him!’ ” said Edwin Dejesus, who owns the nearby LDJ Tea Shop.

Another witness said the two men were screaming at each other in Spanish.

“He [Torres] was crazy. He smiled and then he stabbed [Orozco] in the chest and sides. He stabbed him twice in the throat,” said Alice Zheng, who works at the Max eatery.

Torres tried to run away but was nabbed by plainclothes cops.

Torres allegedly told cops that he knifed Orozco after the victim fondled himself and blew Torres a kiss, and he was initially charged with murder as a hate crime based on the confession.

But a spokesman for Queens DA Richard Brown said: “There’s not enough evidence to sustain a charge as a hate crime.”

At the time of Orozco’s slaying, Torres was wanted in another daylight stabbing last week on Manhattan’s Lower East Side, sources said.

In that case, Torres allegedly knifed an unidentified 47-year-old man in the arm on Stanton Street about 1:30 p.m. Thursday.

After his arrest, Torres allegedly claimed that the Manhattan victim – who is a friend of Torres’ brother – called him “sweet candy” in Spanish and blew him a kiss, sources said.

“He’s a liar. He said that to clean his crime, but that’s not true,” she said.

Alba, 64, said she was in her doctor’s office when the violence erupted and the doctor went outside to see what happened.

Torres, who underwent a psych exam after his arrest, was awaiting arraignment in Queens Criminal Court Tuesday night.