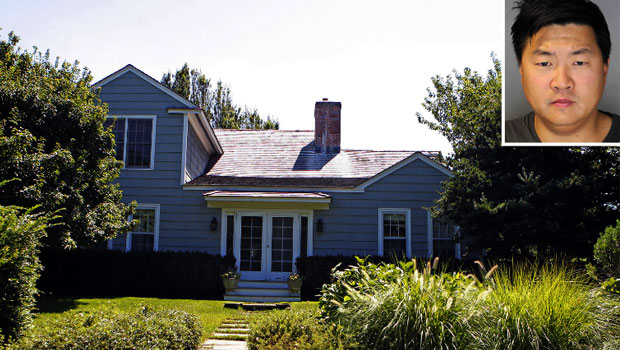 A butt-naked Goldman Sachs banker shoved his way into a bathroom at his flashy Hamptons rental and raped a young Irish seasonal worker, prosecutors said Friday.

Jason Lee, 37, pleaded not guilty to first-degree rape at his arraignment in Suffolk County court and left the proceeding with his grim-faced wife after posting $100,000 bond.

Lee was celebrating his birthday on Aug. 20 with pals at the posh Georgica restaurant in East Hampton and chatting up the 20-year-old victim and her friends before the group headed back to his nearby pad, prosecutors said.

Lee – who is officially on personal leave from his lucrative post at the firm – followed the young lady as she went into a bathroom, according to prosecutors.

He shoved his way through the door and began raping the woman before she stopped the attack with a forceful knee to his groin, prosecutors said.

Lee, who claims the sex was consensual, didn’t take no for an answer, according to Suffolk County District Attorney Tom Spota.

The victim tried to keep the door closed but Lee “shoved it open with enough force to cause her to fall to the floor, where Lee immediately pinned her,” he said yesterday.

The woman – who was working a summer job out of state – went to the East End to visit her brother before they both returned to Ireland.

Lee and his attorney, Edward Burke Jr., have maintained that the sex was consensual and that no rape took place.

The lawyer dismissed the accusations of a struggle and said that there were no marks on Lee after the encounter.

“We have what is an apparent rush to arrest my client, a rush to the grand jury and a rush to indict my client,” the powerful Hamptons attorney said.

The financier said nothing during the proceeding in Riverhead and darted out of court with his spouse without commenting.