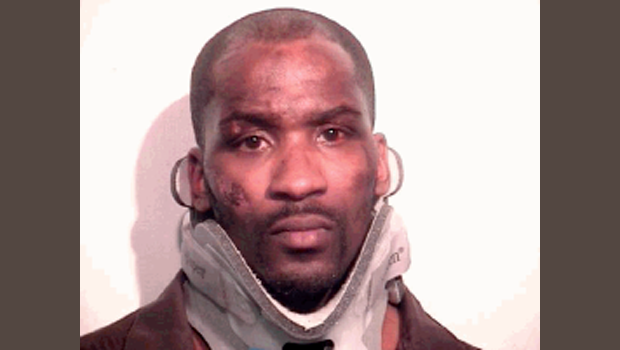 Police allege that Aaron Christopher Pope used an officer’s Taser to “dry stun” the officer during a struggle on Thursday.

Pope, 32,is charged with robbery and felonious assault and was arraigned today in Toledo Municipal Court. His bond was set at $57,500.

According to a Toledo police report, officers were called to a residence in the 2000 block of North Michigan Street on a report of domestic violence. No one answered the door, police reported, but they saw a man matching the description of a suspect walking in the area.

The suspect eventually saw police and fled, attempting to hide behind a bush, police said.

At gun point, police ordered Pope to the ground; he did not comply, police said.

Officer Carl Schwirzinski grabbed the suspect, taking him to the ground, where the suspect reportedly refused to put his hands behind his back to be handcuffed. Police report that they told the suspect several times to stop resisting, but the suspect did not, they said.

Police said hit the suspect with an open hand several times, but the blows were ineffective; police said they warned the suspect they would Tase if he did not comply.

Continuing to resist, Officer Schwirzinski Tased the suspect in the back; the suspect pulled the wires out and kicked the officer in his shins, according to the report. The suspect was again Tased, which was not effective. The suspect, on his knees, grabbed the officer’s shirt and vest and another officer deployed his Taser into the suspect’s back.

The suspect dropped to the ground and Officer Schwirzinski got on top of the suspect to restrain him, but the officer was kicked several more times.

At this point, additional officers arrived. Sergeant Erik Welling reportedly kicked the suspect in an attempt to keep the suspect on the ground, although the suspect reportedly continued to fight, police reported.

Several other officers used their body weight to force the suspect to the ground where he was handcuffed. After being cuffed, the suspect continued to struggle.

According to court documents, the officer was treated for “minor injuries,” at Mercy St. Vincent Medical Center.

According to the documents, Pope was pounding on various doors in the 1700 and 1800 blocks of North Michigan. He was also allegedly yelling and throwing beer bottles. When he was placed under arrest, the suspect allegedly pulled away from the officer and tried to fight police.