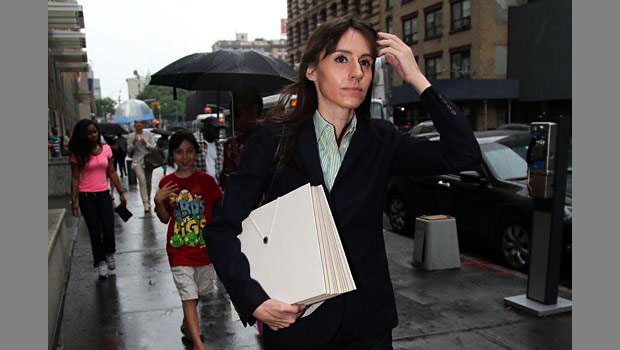 Former teacher who had sex with 16-year-old gets probation

A former city teacher who copped to having sex with a 16-year-old student walked out of a Brooklyn courthouse a free woman – and a registered sex offender – following her sentencing Thursday.

Erin Sayar, 37, had taken a plea for statutory rape for bedding Kevin Eng at James Madison High School, known as “Horndog High” for a string of sexual shenanigans.

She received a 10-year probation, gave up her teaching license and was designated a Level 1 sex offender, which is the lowest level and means her name and picture will not appear in a public database.

“She accepted responsibility and she wants to move on with the rest of her life,” her lawyer James Culleton said upon leaving Brooklyn Supreme Court.

The tattooed temptress carried on a sexual relationship with Eng, whom she tutored, in December 2011 and the two exchanged some 4,000 text messages, authorities said.

The back and forth included “much discussion of drug use, including allegations that the defendant supplied marijuana to the complainant,” said assistant district attorney Serena Horowitz.

The student’s family has lodged a $10 million lawsuit against the city’s Education Department.

Sayar, of Park Slope, had a rough run since the salacious case came to light. She divorced her lawyer husband and had been diagnosed with late stage Lymphoma, a source said.

Asked by Justice Elizabeth Foley if she had something to say, Sayar replied, “No, you honor.”

The Midwood school she taught in received its randy nickname in 2009 after a janitor walked in on two canoodling female teachers. Another educator was investigated that year for extra-curricular activities with a student, but that case was closed because he was over 17, the legal age of consent.