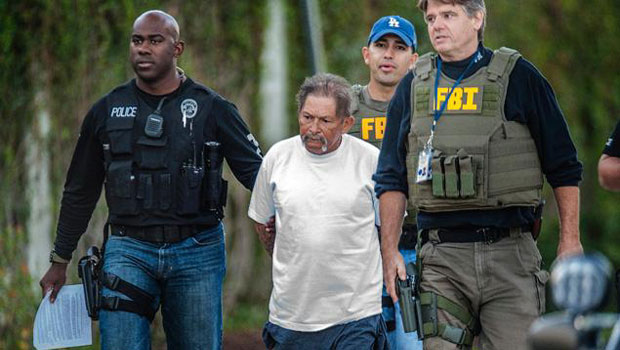 More than 120 people linked to street gangs that claim allegiance to the Mexican Mafia have been indicted on various racketeering, weapons and narcotics charges as authorities attempt to cripple the notorious prison gang’s Orange County wing.

Hundreds of law enforcement officers fanned out across Southern California on Tuesday, making arrests as part of “Operation Smokin’ Aces.” A total of 129 people have been indicted by county and federal grand juries alleging crimes including murder, drug trafficking and extortion.

More than 120 people linked to street gangs that claim allegiance to the Mexican Mafia have been indicted on various racketeering, weapons and narcotics charges as authorities attempt to cripple the notorious prison gang’s Orange County wing.

The Mexican Mafia sought and received payments from gangs in Orange County in exchange for freely committing crimes in primarily Latino neighborhoods, according to court documents. Those who refused were put on lists that often resulted in violent retribution.

Even those who appeared to have significant roles in the gang found themselves in trouble. One defendant, Raul Gonzalez-Hernandez, was placed on a “hard candy” list, which meant he was targeted for death. Gonzalez-Hernandez was beaten up by other Mexican Mafia associates in November 2011 for insulting an Orange County Mexican Mafia member and violating leadership rules, court documents say.

Others were even less fortunate. Ramon Alvarez, charged with racketeering conspiracy, allegedly authorized a gang associate to kill a person in December 2011. No one was killed but it’s unclear if the associate was charged.

The prison gang’s Orange County faction was headed by Peter Ojeda, according to the indictment. He wasn’t charged Tuesday but is awaiting trial in another racketeering conspiracy case filed in 2011.

Those who spoke poorly of Ojeda also were met with violence, authorities said. Juanita Carillo-Ortiz, 39, was killed in Mexico last year because she was “talking disrespectfully” about Ojeda, according to court documents.

The Mexican Mafia has long been suspected by law enforcement of controlling drug distribution and other illegal activities within California jails and prisons as well as on the street. By extorting gangs via “taxes,” the Mexican Mafia receives a portion of the proceeds while also offering gangs protection or assistance if needed.

Authorities said they seized 22 pounds of methamphetamine, 1 1/2 pounds of heroin, 3 pounds of cocaine and made 67 undercover weapon purchases as part of the investigation.