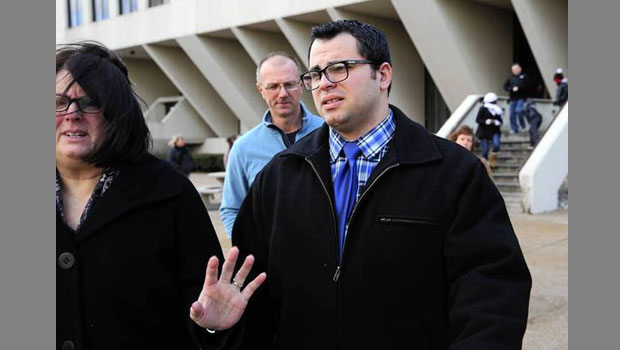 No prison time for man who paralyzed victim with punches

A New Lenox man found guilty of throwing punches that left his victim paralyzed, blind and unable to speak was sentenced Tuesday to 30 months of probation and ordered to turn over the $20,000 his family put up for his bond to the victim’s mother.

Joseph Messina, 25, faced up to 10 years in prison, but Will County Judge Sarah Jones said prosecutors failed to provide enough evidence to overcome the presumption of probation. Family members of Eric Bartels, the man left paralyzed by the punches, gasped when Jones said she was sentencing Messina to probation.

“I’m very disappointed with the sentence, and we believe there was sufficient evidence in the record to justify a prison sentence,” Will County State’s Attorney James Glasgow said. “The injuries to Eric Bartels are a hair’s breadth from murder.

“This isn’t a broken nose. The seriousness of the offense can be taken into account in determining the appropriate punishment.”

Family members of Bartels and Messina declined comment after sentencing.

“This is a legal decision, not an emotional decision,” Jones said repeatedly during Tuesday’s hearing. “Sentencing is the most difficult thing I will do on this job.”

Messina was found guilty in January of aggravated battery after throwing the punches that left Bartels in a coma for months. During testimony last week, family members noted that Bartels, who was in the courtroom Tuesday and has a 3-year-old son, requires constant care at his Tinley Park home.

Prosecutors said the July 2009 attack outside a Mokena restaurant and bar was unprovoked and that Messina threw his second punch after Bartels hit the ground from the first one. Witnesses testified that Messina then threw his hands in the air and made the victory sign while straddling Bartels. Testimony during the trial suggested the punches were thrown after a remark was made about a bloodstain on Messina’s shirt.

“It is a very serious thing you did,” Jones told Messina in her Joliet courtroom.

In addition to 30 months of probation, Messina, who served 59 days in the county jail, was ordered to pay $630 a month during his probation to the victim’s mother, Jan Bartels, to help cover the cost of caring for Eric Bartels. Jones said she used Jan Bartels’ figures for monthly health care expenses in determining the restitution to be paid by Messina.

Messina also must complete 250 hours of community service. Jones also ordered Messina not to drink any alcohol while on probation and noted that a 180-day county jail sentence could be imposed if he breaks his probation agreement.

“Your failure or success will only be up to you,” she said.

Source: chicagotribune.com “No prison time for man who paralyzed victim with punches,” August 19, 2013.