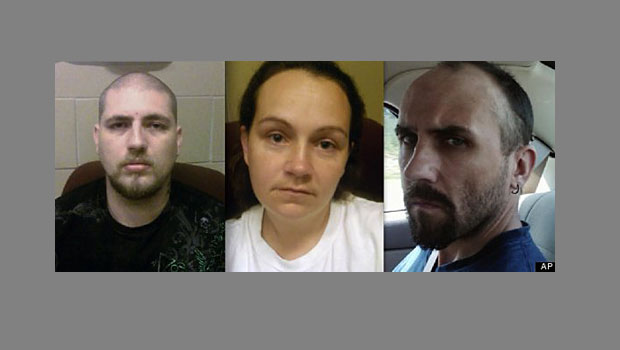 A mentally disabled woman and her young child were held in captivity for more than a year, sometimes denied food and threatened with a pet python and pit bulls, and the woman was beaten and forced to get pain medication for her captors, authorities said Tuesday in announcing federal charges against three suspects.

The three invited the woman and her child, whose names were withheld, to live with them and, beginning in early 2011, forced the mother to do housework by threatening to hurt her and the girl, described as 5 or 6, federal authorities and Ashland police said.

The mother and child were freed in October after police investigated an abuse allegation one of the suspects made against her, authorities said, and they are doing well.

“The victim in this case is slowly recovering,” U.S. Attorney Steve Dettelbach said.

Jordie Callahan, 26, Jessica Hunt, 31, and Daniel J. “DJ” Brown, 33, all of Ashland, were charged with forced labor. They were being held, pending a federal court hearing. Callahan also was charged with tampering with a witness in the investigation.

No attorneys were listed for them in court records.

According to an FBI affidavit, the mother and child were denied food at times or given leftovers; on one occasion when they hadn’t eaten all day, the mother was given a plate of food and ordered to feed the pet dog.

The trio looted the woman’s bank account and public assistance and on several occasions injured her and ordered her to go to the emergency room for pain medication, according to the affidavit.

The woman told investigators the trio learned of her plan to try to escape and punished her by shaving her hair into a Mohawk and using a marker to write “slut,” “tramp” and “whore” on her face and chest. She was forced to clean up the hair without a broom or dust pan, according to the affidavit. The woman was forced to do house work and shop for her captors and clean up after pets, authorities said.

“They treated her with such cruelty that it is hard to comprehend,” Dettelbach said. “They tried to take away her human dignity.”

Police first got involved when the woman was charged with shoplifting a candy bar and asked to be jailed because the three suspects “had been mean to her,” said Ashland police Lt. Joel Icenhour.

Police checking into her claim went to the apartment after one of the suspects said it was the woman who was abusive. Authorities said the allegation was a ruse complete with a video staged by the suspects.