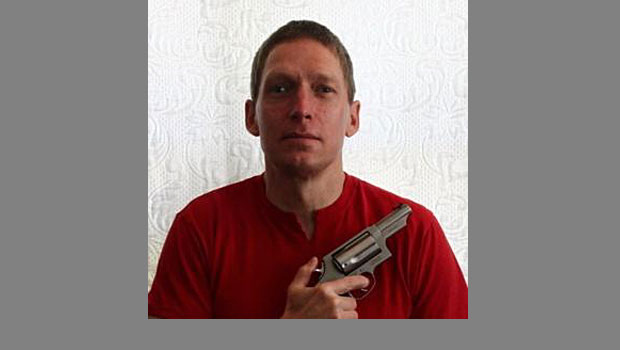 A blind NRA member from New Mexico was busted at Newark Airport with a handgun in his checked luggage – but the weapon was only discovered because he tried to get 10 bullets past the security screeners.

Raymond Whitehead, 53, was traveling with his two grown kids and his wife when TSA screeners spotted the hollow point ammo in his bag around 10 a.m. Tuesday at the American Airlines terminal.

Port Authority cops then found the .38 caliber Charter Arms revolver and seven illegal knives in his checked luggage, and he was arrested.

Whitehead claims police allowed him to bang into walls and denied him a lawyer or food for 10 hours. He is vowing to sue.

A Port Authority Police official said he was not mistreated.

The carpenter said he took the gun with him because he was traveling to a “strange place” and wanted to be able to protect his family and property.

Despite his blindness, Whitehead legally owns two guns in Santa Fe – and says he’s willing to blast anyone who invades his home.

“In my opinion, what happened to me was unconscionable and unforgivable,” said Whitehead., who lost all sight 11 years ago due to a degenerative eye disease

Whitehead said he has flown “at least a dozen times” in recent years with a gun in his checked suitcase without a problem.

Whitehead was released on $15,000 bail, but faces a raft of weapons charges.

Source: newyorkpost.com “Newark Airport: A blind NRA member found to have gun in luggage,” May 7, 2013.