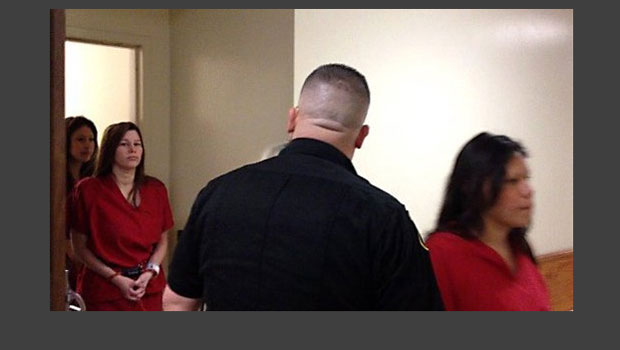 A preliminary hearing has been scheduled for next week after one of nine defendants in a fatal killing earlier this month refused to waive her right to a speedy trial.

Nine defendants accused of a killing in a Feb. 14 gang-related attack in northwest Modesto appeared briefly Monday morning in Stanislaus County Superior Court. All pleaded not guilty to murder charges in the attack on 20-year-old Erick Gomez.

Giovani Barocio, 21, the 10th suspect in the case, was not listed in custody Monday at the Stanislaus County Jail. Investigators allege that Barocio was the gunman in the attack and have issued a $2 million warrant for his arrest.

After Monday’s hearing, Brennan said he decided to go with a grand jury rather than a preliminary hearing because it’s faster.

“This will expedite the case to jury trial,” he said.

Nevertheless, Judge Thomas Zeff scheduled a hearing for Monday when one of the female defendants – it wasn’t clear which one – declined to waive her right to have proceedings within 10 days.

A criminal complaint filed last week alleges that the defendants were involved in the beating, stabbing and shooting of Gomez in the 2400 block of Vera Cruz Drive, just east of Coffee Road and south of Floyd Avenue.

Investigators have said the attack was premeditated; Sureño gang members roamed the area in search of rival Norteños. The complaint alleges that the gang members met at a nearby park to “plan and prepare for retaliation against Norteño gang members,” arming themselves with knives and at least one gun. They then drove around Modesto in several vehicles, asking potential victims about their gang affiliation and flashing Sureño gang signs at people they perceived to be Norteño gang members.

The suspects yelled Sureño gang challenges while stabbing Gomez, according to the criminal complaint. Gomez was then shot several times.

If you have been arrested for a Violent Crime the Law Offices of Daniel R. Perlman can help. Please contact a Criminal Attorney Glendale CA today to have your case reviewed.