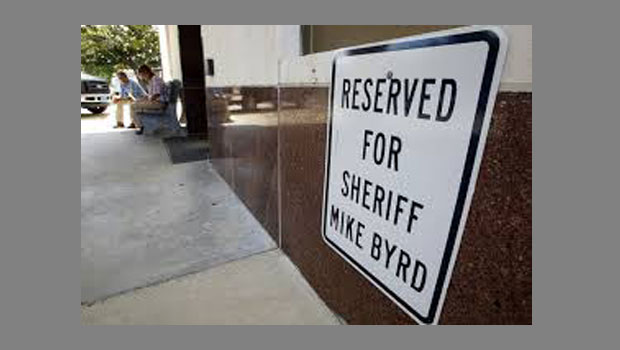 A south Mississippi sheriff has been indicted on 31 counts, including charges accusing him of pushing an arrest in a murder case, even though a detective thought the suspect was innocent, and of snooping on employees at a restaurant that refused to accept a check from him.

The indictment against longtime Jackson County Sheriff Mike Byrd was dated Thursday and made public Friday. It charges him with using his office to retaliate against people he considered political and personal foes, including the police chief and a city alderman in Ocean Springs, one of the cities in Jackson County. The charges include fraud, extortion, embezzlement, witness tampering and perjury.

One of the charges said Byrd pressured a detective to sign a criminal affidavit and seek an arrest warrant against a man in a murder investigation in 2007 when the detective did not believe the man committed the crime. The indictment said Byrd was running for re-election at the time and wanted to be able to say there were no unsolved murders in the coastal Mississippi county of about 140,000 people.

An extortion charge in the indictment said Byrd pressured a female deputy to engage in sexual acts and threatened to give her a bad recommendation if she left his department.

District Attorney Tony Lawrence said in a written statement that Mississippi law prevents him from discussing the details of the case.

Several south Mississippi news organizations said Byrd turned himself in Thursday and was released on bond.

Byrd is a Republican in his fourth term.

Another of the charges said Byrd ordered the surveillance of Ocean Springs Police Chief Keith Davis in retaliation for Davis “embarrassing” Byrd by disclosing a July 2012 shooting involving narcotics task force agents. The shooting involved two agents, with one accused of shooting toward the feet of another in the task force headquarters. Byrd also is charged with hindering prosecution by ordering that evidence in the case be concealed.

Another count in the 15-page indictment said Byrd sent narcotics agents to perform surveillance on employees of a Mexican restaurant because the eatery had refused to accept a check from him. He’s also accused of sending officers to watch a man who objected to the location of a hotel in Ocean Springs and using the power of his office in refusing to pay for repairs to his lawn mower.

Some of the counts are related to testimony in a case involving former Ocean Springs Alderman James Hagan, who was charged with child exploitation related to an alleged image on his city laptop. The district attorney’s office later declined to prosecute the case.

Some of the fraud charges are related to the money it cost for the agents to conduct what the grand jury considered illegitimate surveillance ordered by Byrd.

Embezzlement charges accuse him of sending department employees to solicit money for at work at events like bass tournaments and paying them with Jackson County funds.