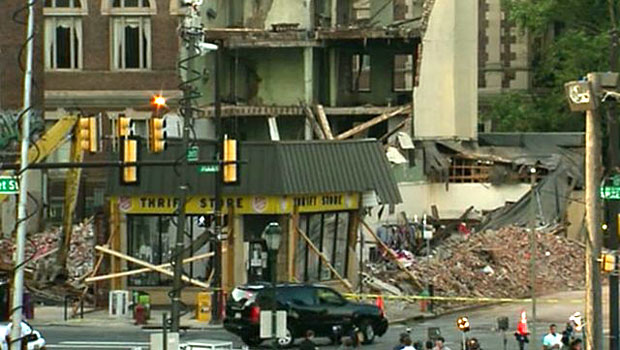 Authorities expected to file manslaughter charges against the man who was operating the crane at a Philadelphia building collapse that killed six people on Wednesday, officials said.

Marijuana was found in the system of the crane operator, Sean Benschop, 42, after the collapse, according to police sources.

The operator also admitted to taking codeine and other prescription drugs before the accident, and he was outfitted with a soft cast up to his elbow while working the heavy machinery, police sources told ABC News station WPVI. A source later confirmed the details to ABC News.

Mayor Michael Nutter’s office had said Benschop was charged with six counts of involuntary manslaughter and one of reckless endangerment, but the Philadelphia District Attorney’s Office later said that was mistaken.

“No one has been charged with anything in this case,” said Tasha Jamerson, a spokeswoman for the Philadelphia D.A.’s office.

Benschop declined to answer questions when a reporter with the Philadelphia Inquirer contacted him by cell phone today.

Citing court records, The Inquirer reported Benschop has been arrested 10 times for a range of offenses, including drug charges, theft, firearms and assault.

In addition to those killed, 14 more were injured when the vacant building collapsed on a Salvation Army Thrift Store Wednesday morning.

Rescue workers used buckets and their bare hands to move bricks and rubble to free a 61-year-old woman late Wednesday night, but that was the sole piece of good news to come from the pile of rubble where a four-story building used to stand in Philadelphia’s Center City.

The 30-hour search-and-rescue operation for additional victims ended Thursday. At that time, Mayor Michael Nutter told ABC News that officials were confident there were no more people buried.

The building was being torn down as part of a community redevelopment project. The thrift store was open throughout the demolition.

Two of those killed were Salvation Army employees.

“We are deeply saddened by the tragic loss of life of the six individuals who perished in the wake of yesterday’s building collapse,” the organization said in a statement. “The passing of these individuals, including two of our employees, will be felt across our entire organization and throughout the community.”

Philadelphia officials were facing tough questions over whether the accident could have been prevented.

Nutter and the city’s commissioner of licenses and inspections, Carlton Williams, have conceded that complaints about the working conditions at the demolition site were not followed up on.

“No subsequent inspection occurred to indicate there was any unsafe conditions,” Williams said. “We did not follow up and we are definitely looking into that.”