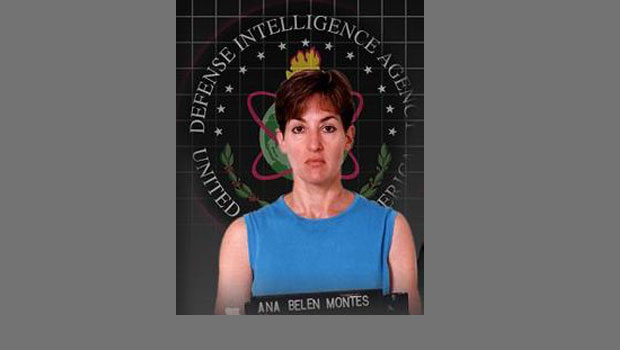 Almost 30 years ago, two young women allegedly obtained fake passports in Europe for a clandestine trip to Cuba. Today, one is in prison serving a 25-year sentence for espionage; the other has taken shelter in Sweden.

On Thursday, the U.S. government stepped up its efforts to get that second woman, Marta Rita Velazquez, from Sweden to an American courtroom.

Velazquez, 55, a U.S. citizen born in Puerto Rico, was charged in 2004 with conspiracy to commit espionage for her role in recruiting Ana Belen Montes to give American secrets to Cuba, according to a previously sealed indictment that the Justice Department released Thursday. Montes is in prison, convicted of spying while she was employed at the Defense Intelligence Agency.

Since 2002, Velazquez has been in Sweden, where, the documents say, she at one time had a husband. Velazquez is aware of the charges against her, so there is no longer any reason to keep the indictment secret, a Justice Department official said.

Because espionage is considered a “political offense” under most international treaties, including the treaty between the U.S. and Sweden, the U.S. cannot simply seek Velazquez’s extradition. Release of the documents, however, could build pressure on Sweden to return Velazquez to face charges here, where she would potentially face life in prison.

Velazquez operated from the 1980s until 2002 under the code name “Barbara,” recruiting potential agents for Cuban intelligence, according to the indictment. She would “spot, assess and recruit U.S. citizens who occupied sensitive national security positions or had the potential of occupying such positions in the future to serve as Cuban agents,” the Justice Department said in a statement accompanying release of the indictment.

The indictment focuses on Velazquez’s relationship with Montes, who has admitted to revealing the identities of four undercover American intelligence officers who were working in Cuba.

Velazquez allegedly met Montes in the early 1980s as a fellow student at Johns Hopkins University’s School of Advanced International Studies, where she picked up on Montes’ sympathies for Latin American countries at odds with the U.S., particularly Nicaragua. Velazquez quickly funneled Montes, who was then employed as a clerk at the Justice Department, into the Cuban intelligence service, the indictment alleges.

Velazquez, who was an attorney advisor at the Department of Transportation and later worked at the U.S. Agency for International Development, allegedly used political connections to get Montes a position at the Defense Intelligence Agency in 1985.

From the mid-1980s until she left the country, Velazquez received instructions from the Cubans through encrypted, high-frequency broadcasts and meetings with Cuban agents outside the U.S. and then passed those directions to Montes, the Justice Department said.