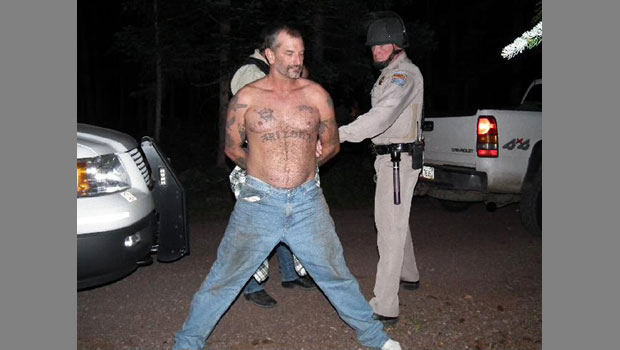 The capital murder trial of an Arizona inmate accused of killing an Oklahoma couple after breaking out of prison resumed Monday with prosecutors calling a fellow inmate to testify about the escape and subsequent flight.

The prosecution’s case against John McCluskey hinges partly on the testimony of inmate Tracy Province. The two, along with an accomplice who threw cutting tools onto the prison grounds, sparked a nationwide manhunt when they escaped from a medium-security prison near Kingman, Ariz., in July 2010.

Province testified that it took three months to plan the escape but only three minutes to accomplish.

The inmates scaled one fence and cut wire and more fencing along the prison perimeter before they began searching for their getaway car, Province said.

Prosecutors say the trio kidnapped two truck drivers and commandeered their semi after walking hours through the desert. They hitched another ride south, picked up another car with the help of McCluskey’s family members and then headed toward the Arizona-New Mexico state line where they camped.

Province, who had been serving life in prison, testified that he felt exhilarated despite not having heroin in days. Prosecutors had asked him earlier about his years of drug use, which he was able to maintain while in prison.

Province testified he and the others made an agreement early on: If they came in contact with police while on the run, they were going to “shoot it out.” He said he never once thought about turning himself in because he didn’t want to die in prison.

According to court documents and Province’s testimony, the trio targeted Gary and Linda Haas of Tecumseh, Okla., at a rest stop near the Texas-New Mexico state line on Aug. 2, 2010. Tired of driving more than 1,000 miles in their cramped get-away car, they wanted the couple’s pickup truck and trailer.

The Haases were carjacked at gunpoint and forced to drive to a desolate spot along Interstate 40 in eastern New Mexico.

Province said he and the accomplice, Casslyn Welch, were outside the trailer when they heard gunshots ring out. He pointed to McCluskey as the triggerman.

Province said McCluskey asked for his help moving Gary Haases’ body and then the trio found a more remote spot where they unhitched the trailer and set it ablaze with the bodies inside.

Province said he thought of his own parents when he heard the four shots. In the following days, he said McCluskey apologized to him a number of times.

McCluskey’s attorneys will cross-examine Province on Tuesday. They have already raised questions about his drug use and have challenged his credibility and motives for cooperating with prosecutors.

According to court documents, Province separated from McCluskey and Welch and was arrested in northwestern Wyoming about a week after the slayings. He was found with the Haases’ backpack, a Bible, a gun, knives and other supplies.

He told authorities his plan was to overdose on heroin at Yellowstone National Park, but he decided to try to hitchhike to see family in Indiana instead.