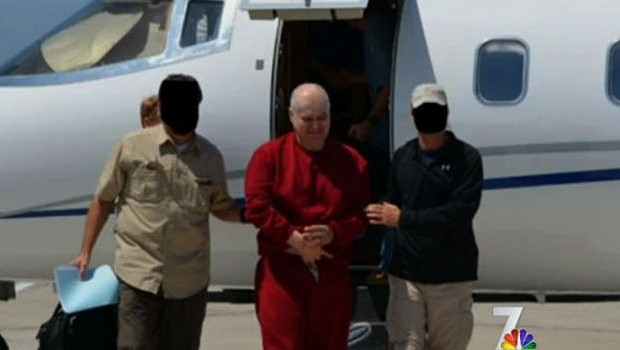 Eduardo Arellano-Felix, 56, is set to spend 15 years in prison

One of the last leaders of one of the world’s most notorious drug cartels pleaded guilty in federal court in San Diego on Friday to money laundering and conspiracy charges.

Eduardo Arellano-Felix, 56, is one of four brothers linked to Tijuana’s powerful Arellano-Felix Organization (AFO). He was arrested by Mexican authorities in Tijuana, Mexico in Oct. 2008 after a gun battle with a Mexican Special Tactical Team and extradited to the U.S. on Aug. 31, 2012.

The AFO is known as one of the most notorious multi-national drug trafficking organizations, controlling the flow of cocaine, marijuana and other drugs through the Mexican border cities of Tijuana and Mexicali into the United States. Its operations also extended into southern Mexico and Colombia.

With Arellano-Felix‘s guilty plea deal on Friday, the leader could spend the next 15 years in a U.S. prison. His sentencing has been scheduled for Aug. 19, when a judge is expected to formally approve the plea bargain.

According to prosecutors, Arellano-Felix – a medical doctor nicknamed “El Doctor” — laundered money from drug deals and then used those illegal proceeds to invest into and benefit his family’s notorious drug cartel for more than a decade, from 1986 to 2002.

Arellano-Felix admitted to he was a “senior member” of the AFO.

According to the office of U.S. Attorney Laura E. Duffy, Friday’s plea marks the conclusion of the U.S. government’s 20-year battle to dismantle the AFO and its wide scope of violent criminal activity that plagued the Southwest border and beyond.

“I’m proud to say this is the end of an era,” Duffy said in a media statement. “When this ruthless cartel was thriving in the 1990s, we made what some considered an audacious and impossible commitment to wipe out the organization. Today, we can say we have done just that.”

“This plea agreement pounds the final nail in the coffin of what used to be the Arellano-Felix Organization,” Sherman said. “The AFO, once a brutally violent cartel, now becomes a footnote in history books, while DEA and our partners focus on dismantling the drug trafficking organizations that have moved in since the AFO’s demise. We will be just as relentless in our pursuit of these new trafficking organizations and they will be brought to justice in the same manner as the AFO.”

In addition to serving time in prison, Arellano-Felix will be required to forfeit $50 million derived from illegal activity. He will waive any claim to money or property that the U.S. government has seized or can seize, that he acquired from his illegal acts.

Prosecutors and investigators say the resolution of this case was a long time coming.

Arellano-Felix and his brothers were first indicted in 1998 on drug conspiracy charges. Additional charges of racketeering, money laundering and conspiracy to distribute and import marijuana and cocaine soon followed.

Brothers and former co-leaders of the AFO, Benjamin Arellano-Felix and Francisco Javier Arellano-Felix, were captured in 2002 and 2006. They are both currently serving sentences in the U.S.

Ramon Arellano-Felix, the cartel’s enforcer, was killed in a shootout with police in 2002. In addition to the brothers, multiple top AFO lieutenants have been convicted over the years.

The operation to bring down the infamous cartel was a multi-agency project led by agents from the Drug Enforcement Administration, FBI, IRS and an Organized Crime Drug Enforcement Task Force created to consolidate and coordinate all law enforcement resources in the battle against major drug trafficking rings, drug kingpins and money launderers.