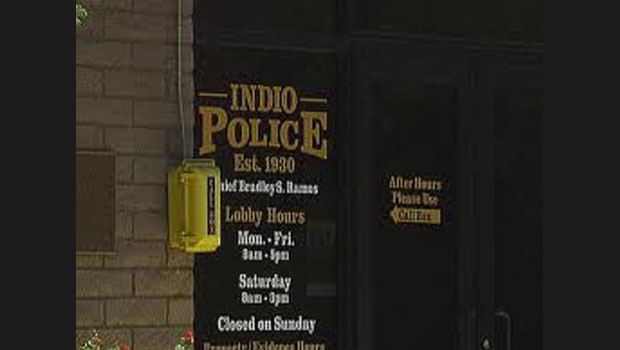 Arraignment is expected Monday for a robbery suspect wounded when he allegedly opened fire on an Indio police officer who returned fire.

The officer was patrolling in the area of Highway 111 and Madison Street about 8 a.m. Thursday when he saw a man, later identified as 32-year-old Eddie Joseph Rivera of Indio, using a pay phone at the Kmart shopping center.

The officer determined he matched the description of a suspect in an earlier robbery in the city.

“We basically had a bulletin to look out for (him),” Indio Police Department spokesman Ben Guitron said.

The officer tried to get Rivera‘s attention in a driveway north of Highway 111 on the east side of Madison near a Stater Bros. store and a bank, Guitron said.

The suspect also allegedly fired at another officer as he arrived at the scene, but both officers escaped injury, Guitron said.

The officers were put on paid leave pending an administrative review, which is standard procedure in officer-involved shootings, Guitron said.

Rivera was transported to a hospital for treatment and then taken to the county jail in Indio, where he was being held without bail.

He was booked on suspicion of attempted murder of a peace officer, being a convicted violent felon with a firearm and violating parole, according to jail records.

Source: swrnn.com “Felon accused of shooting at two police officers in Indio to be arraingned,” April 17, 2013.