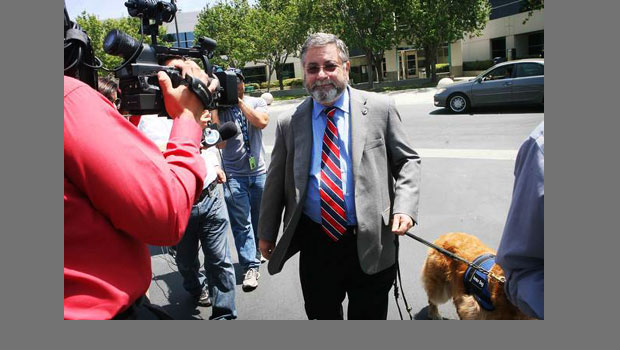 The homes of Mayor Tom Owings and the four other council members are targeted, as well as the corporate offices of a firm that has proposed a warehouse center.

Federal agents searched the homes of Moreno Valley’s mayor and City Council members and the offices of a major warehouse developer Tuesday as part of a broad public corruption investigation in a Riverside County town already singed by scandal.

Agents with the FBI, Internal Revenue Service and local prosecutors served search warrants at the homes of Mayor Tom Owings and the four other council members and at the corporate offices of Highland Fairview, the company that has proposed a 41-million-square-foot warehouse center on the city’s eastside.

“Today, the FBI along with the Riverside district attorney’s office and the IRS criminal investigative division executed several search warrants in and around Moreno Valley,” said Colin Schmitt, supervisory special agent with the FBI’s public corruption division. “At this time we’re not able to comment further on the details of the warrants because they are sealed.”

The mayor – a former car dealership owner and Planning Commission member – denied any wrongdoing. Owings was first elected to the council in November and voted in as mayor by his fellow council members in January.

“On the advice of my attorney, I’m not going to speak about this at this time,” Owings said. “I’m confident that I’ve done nothing wrong.”

Highland Fairview’s proposed warehouse center, known as the World Logistics Center, has been embroiled in controversy and faces opposition from nearby residents who fear that it will cause traffic jams and harm air quality.

Iddo Benzeevi, chief executive of Highland Fairview, could not be reached for comment Tuesday.

The Moreno Valley investigation is being conducted by a joint corruption task force established in 2010 amid widespread allegations of government corruption in Riverside and San Bernardino counties.

In March, Moreno Valley school board member Mike Rios was sentenced to 14 years in prison for pimping and running a prostitution ring.