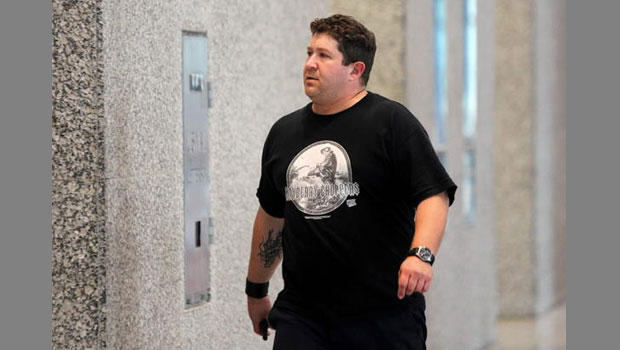 A former Cook County sheriff’s deputy was sentenced Thursday to one month in prison for stealing $1,100 in cash from a South Side home during an eviction that turned out to be an FBI sting.

“I know what I did was wrong,” a tearful Samuel Spino said moments before U.S. District Judge James Zagel imposed the sentence. “It has changed my life… I lost everything.”

The 10-year veteran of the force was arrested last year after Cook County sheriff’s investigators looking into a pattern of theft complaints noticed that Spino was involved in each eviction in which property had disappeared. The FBI was brought in, and agents installed hidden cameras in a home where Spino was scheduled to serve an eviction notice, then planted cash in a glass on a microwave cart in the kitchen.

The cameras showed Spino picking up the glass and reaching in before moving out of view of the camera, authorities said. In the next instant, he came back into view and appeared to place an object in his cargo pants pocket as he left the kitchen.

Spino, 36, of Willowbrook, was stripped of his badge and weapon after his arrest. He pleaded guilty in March to theft of government property and faced up to six months in prison. Prosecutors said Thursday that although he was charged in only the one incident, Spino undoubtedly had committed thefts at earlier evictions.

Spino’s attorney, Daniel McLaughlin, argued for a term of probation, saying Spino has overcome mental problems and alcoholism since his arrest. But Zagel said Spino’s abuse of trust as an officer warranted at least some prison time regardless of his personal issues.

“You’ve really done a terrible thing, and you did it by virtue of a position the principal requirement of which is that you follow the law,” Zagel said.

Source: chicagotribune.com “Ex-deputy gets 1 month in jail for stealing cash during eviction,” September 3, 2013.