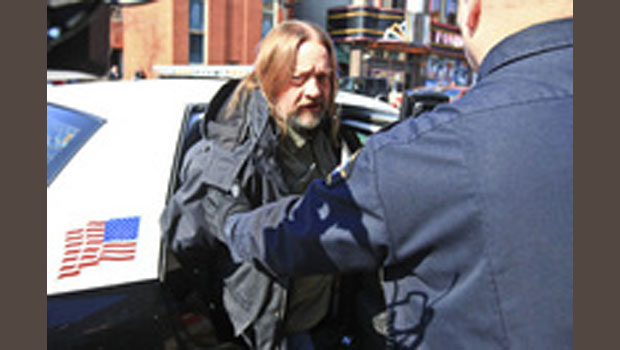 Last Place on Earth owner Jim Carlson and his son, Joseph Gellerman, each are charged with four counts of the sale of a controlled substance in the fourth degree.

Jim Carlson, owner of the Last Place On Earth head shop that sells synthetic drugs in downtown Duluth, told the court this morning that his “attorney and everybody tells me what I’m selling is legal.” But Carlson was in a jail jumpsuit, handcuffs and shackles because law enforcement and the government disagree with his assessment.

Carlson, 55, of Superior, and his son, Joseph Gellerman, 34, of Duluth, each are charged today with four counts of the sale of a Schedule I, II or III controlled substance in the fourth degree. The crimes are punished by a maximum sentence of 15 years in prison and a $100,000 fine, but under sentencing guidelines would result in a probationary sentence and up to a year in jail for someone with no prior criminal record.

Duluth police on Friday arrested Carlson and Gellerman after executing a search warrant at the Superior Street shop.

The Lake Superior Drug and Violent Crime Task Force began its most recent investigation of Last Place on Earth on March 5 in response to a suspected drug overdose due to the use of a purported pipe cleaner/bath salts labeled “Riptide.” A package of Riptide was found on the victim.

Assistant St. Louis County Attorney Jonathan Holets asked the court to set bail at $480,000 for Carlson. The prosecutor said that figure was arrived at because that’s how much Carlson – by his own admission – makes in gross receipts for the sale of the synthetic drugs each month, Holets said.

Holets told Judge Sally Tarnowski that Carlson and his business are a danger to public safety. He said Carlson continues to profit while the community suffers. The prosecutor recited a litany of adverse effects his office sees because of Carlson’s alleged sale of controlled substances:

Carlson said he believes his product is legal and that the government has seized $3 million of his property.

The store owner argued for himself; he said his attorney, Randall Tigue, was out of town. Tarnowski advised Carlson to limit his argument to his release conditions because anything he said could be used against him at future hearings. He said he always shows up for his scheduled court hearings, which he has done while facing a 54-count federal indictment for allegedly violating federal drug and product-labeling laws.

Tarnowski set bail at $450,000 without conditions, or $100,000 if Carlson doesn’t use, sell or possess any synthetic drugs at his business or elsewhere.