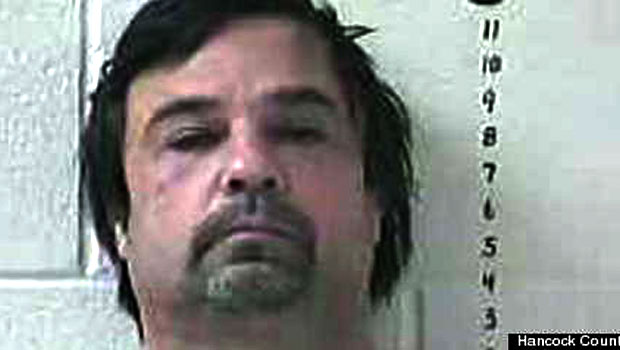 A truck driver who was suspected in the 2009 death of his girlfriend, but only served time for burning her corpse, has been charged with raping his ex-wife.

Mark Andrew Rice went to his ex-wife’s house in the neighborhood of Bayside Park on Saturday, where he severely beat her, taped her mouth shut, tied her hands and sexually assaulted her, said Glenn Grannan, chief investigator for the Hancock County Sheriff’s Department.

The assault, which authorities believe lasted about an hour and a half, was interrupted when someone walked in, Grannan said. The woman ran out of the house and Rice slashed his wrists, he said.

Rice was treated at a hospital and taken to jail Monday, Grannan said. He was charged with rape, kidnapping, and aggravated domestic violence and was being held on a $750,000 bond, said Hancock County Sheriff Ricky Adam.

“It was pretty brutal,” Adam said of the attack.

Grannan said he did not know if Rice had a lawyer. The attorney who represented him in the 2009 case didn’t immediately respond to a telephone message left Thursday.

The alleged attack happened just months after Rice was released from prison in connection with the first case.

He had been sentenced in December 2011 to six years in prison after pleading guilty to arson and desecrating a corpse in the girlfriend’s death. Some of his sentence was suspended for time served, and he was released in March.

South Mississippi authorities said they believed that Rice deliberately killed the girlfriend, Natasha Carpenter, but couldn’t charge him because the killing is believed to have taken place in California. California authorities declined to press charges, saying there wasn’t enough evidence. Rice set his truck on fire with the body inside in his hometown of Kiln, Miss.

Rice’s story was that he met Carpenter at a truck stop in Texas. He fell in love after several encounters along his route and bought her an engagement ring, popping the question on Sept. 15, 2009. As part of their celebration in Barstow, Calif., Rice said Carpenter agreed to let him bind her arms and legs and put a gag in her mouth as he acted out a fantasy.

Rice told police that the woman suffocated by accident and when he found her dead, he panicked, bought “all the meth his dealer had” and drove to Mississippi with the body under a tarp in the truck’s cab.

“I had been up for days. I was not thinking clearly,” Rice said at his plea hearing in 2011.

When he made it to Mississippi with Carpenter’s body, Rice said he planned to say goodbye to his family and kill himself. His family took a gun away from him so he climbed into the rig and set it ablaze. Deputies pulled him from the burning truck.