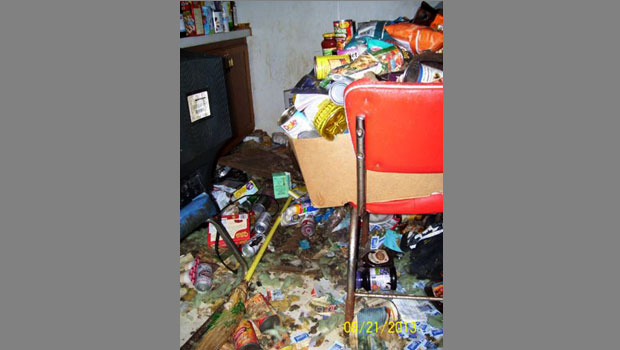 A Colorado woman accused of hoarding is facing 52 animal cruelty charges and one count of child abuse after law enforcement officers raided her home. The home was so unsanitary that authorities said they could smell a foul odor from the street and had to wear hazmat suits upon entering the residence.

“There was a very strong odor of what I believed to be cat urine coming from the house, so bad that even standing outside the house my eyes were watering and my throat was burning,” Fremont County Sheriff’s Sgt. Megan Richards wrote in an affidavit.

Rhonda Bernard, a 57-year-old Fountain, Colo. woman, was under investigation by the Fremont County Sheriff’s Office after a neighbor reported that Bernard had moved from her Penrose home but had left several animals behind, KKTV reported.

The Gazette reports that Bernard herself turned in an additional 23 Chihuahuas to a local shelter before allowing the authorities to go into the residence and rescue the other animals.

Due to the extreme unsanitary conditions of the home and the accumulated trash, animal feces and urine, all staff entering the residence had to wear hazmat suits and breathing apparatus, the Canon City Daily Record reported.

Besides the animal cruelty charges, Bernard is also facing a child abuse charge because her 10-year-old son also reportedly lived in the unsanitary home, according to the Associated Press.

Bernard was arrested after she turned herself in to Fremont County Detention Center. She is being held on a $1,500 bond.