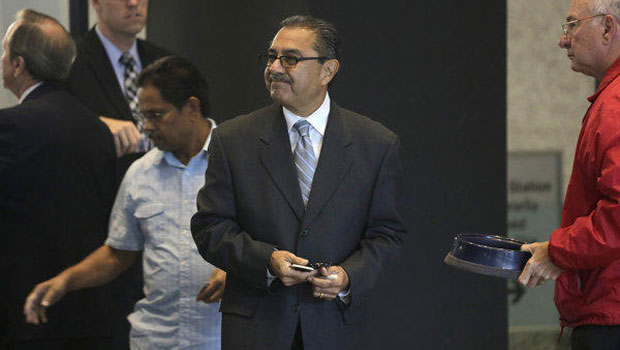 Former Chicago Alderman Ambrosio Medrano was convicted of corruption Tuesday for a third time and could face more than a decade in prison after pleading guilty in a 2010 bribery scheme to influence a bandage contract at Stroger Hospital.

Medrano, 59, pleaded guilty to one count of wire fraud but reached no agreement with prosecutors on the likely length of his prison sentence. Prosecutors said they plan to ask for up to 20 years in prison at sentencing in January, while Medrano‘s attorney, Gal Pissetzky, said closer to two years would be appropriate.

“You understand there is a dramatically different view of what the (sentencing) guidelines will be?” U.S. District Judge Gary Feinerman asked Medrano, who answered in a soft voice that he understood.

A disgraced former alderman who went to prison nearly two decades ago in Chicago’s infamous Operation Silver Shovel probe, Medrano is also awaiting sentencing on a separate conviction earlier this year for plotting with a Nebraska businessman to pay off a Los Angeles official for a mail-order pharmaceutical contract with the Cook County hospital system.

The businessman, James Barta, 71, was sentenced Tuesday to 21 months in prison for his role in the scheme.

In a recent court filing calling for the maximum five-year sentence for Medrano in that case, prosecutors called the former alderman “incorrigibly corrupt” and said that to him bribery “was just part of the government process, something that went without saying.”

The charges to which Medrano pleaded guilty stemmed from a lengthy federal investigation in which the government used a mole – Michael DiFoggio, a Bridgeport businessman with tax troubles who was a pal of Medrano’s – and an undercover FBI agent to snag a number of targets, including Joseph Mario Moreno, a former Cook County commissioner.

Medrano admitted Tuesday to scheming with Moreno and others to steer a contract for Dermafill medical bandages to a particular company in exchange for thousands of dollars in bribes and kickbacks.

Moreno has pleaded guilty in the case as well as to two other fraud schemes and faces up to seventeen and a half years in prison.

A longtime fixture in Chicago’s Pilsen community, Medrano was a protege of former Mayor Richard M. Daley who in 1989 was the Hispanic coordinator of Daley’s first mayoral campaign. He was elected to the City Council in 1991 and was considered a rising Latino political star. But just five years later, he became the first city official to go down in the sweeping Silver Shovel investigation that ultimately netted 18 convictions, including those of six aldermen. Medrano pleaded guilty to pocketing about $31,000 in bribes from John Christopher, a mob-connected paving contractor-turned-government mole.

After serving 30 months in prison, Medrano twice tried to re-enter political life but both times was ruled ineligible because of a state law barring convicted felons from running for office.